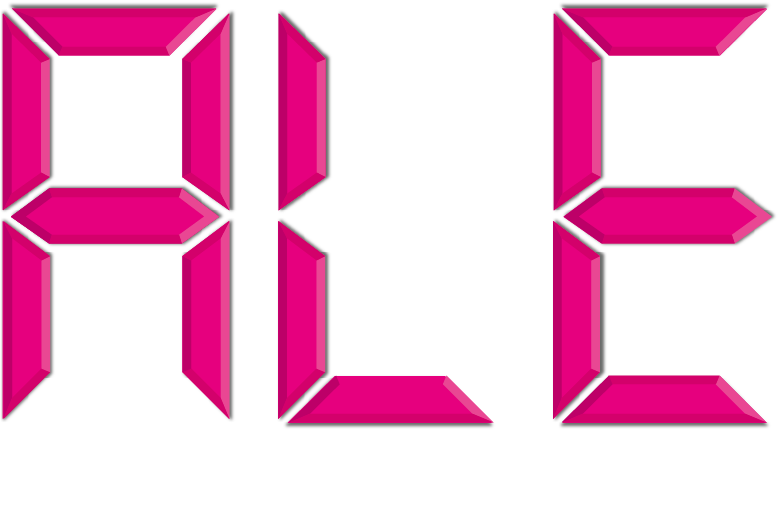 Joe Trungale, in his 1997 book “The Anilox Roll”, dates the earliest experimental work on laser engraved ceramic rollers, beginning in the late seventies. The basic method of engraving a ceramic coated roller with a laser has remained little changed over nearly five decades and, though technology has moved on apace, the basic principle outlined in Joe Trungale’s scholarly book remains as true today as ever.

A simple way to think about the laser engraving of a ceramic Anilox roller is that a focused laser beam is pulsed synchronously to a roller surface rotating near to the focus point of the laser. The number of laser pulses in a column around the roller, and the distance that the columns of pulses are set apart along the axis of the roller, defines the number of Anilox cells in a given area. The relative position of Anilox cells from column to column defines the angle of the Anilox cell structure; 30, 45, 60 degrees etc. The underlying principle of a roller moving past a stationary focus laser beam is found all round the world, on modern and old laser engraving machines alike.

The description given of the Anilox Roller Engraving Method, really explains how the geometry or the template of the Anilox cell structures are obtained. Vitally and deliberately, it did not explain how different cell volumes are controlled. From a physical perspective, greater exposure to the laser beam accompanied by laser beam defocusing has been the principal method of increasing ceramic Anilox cell volume. Greater exposure to the laser takes two forms, one is to increase the laser pulse length and the second is to hit the same Anilox cell with multiple laser pulses.

While it sounds a great idea to defocus the laser and provide more power to each Anilox cell in order to increase cell volume, there is a limitation as to how far this process can be taken. Each time the laser is defocused the energy density on the surface of the roller is decreased and eventually it becomes less practical to gain cell volume when reducing screen count. This Energy Density Ceiling is inherent when using laser exposure and laser focus as the single-track approach to controlling cell volume.

With the Twin Track technique, defocusing the laser in order to fill out an Anilox cell is no longer necessary. All points of a cell can be reached by the focused laser beam and the power at each point in the cell can be controlled. This means the Energy Density Ceiling is no longer an issue, simply because Twin Track operates at close to sharp focus. With Twin Track higher cell volumes can be obtained with a lower depth of engraving. This is because while the focused laser beam is moved around the Anilox cells, the laser power is dynamically changed, thus keeping the cell bottom flatter. If greater cell volume can be obtained with lesser depth, then ceramic coating thicknesses would not have to be so great.

Historically cell depth-to-opening ratios have been used as an indicator of cell quality, but cell depth-to-volume ratio could be even more informative. If one hypothetically considers two imaginary Anilox cells, one conical in profile and one cylindrical. These two imaginary cells could have the same depth-to-opening ratio; however, the depth-to-volume ratio would obviously be quite different. Furthermore, ink is going to be more easily transferred from a flat bottom cell than a cell with a narrowing, pointed bottom. The more difficult it is to get ink out of a cell, the more likely it is that old ink dries and plugs the cell.

Twin Track is better suited to low screen counts than ultra-high screen counts. This is simply because the bigger the cell the more practical it is to in effect shape the focused laser beam to the required cell shape. In conclusion the Twin Track engraving technique increases the range of low screen count engravings that can be produced by a laser engraving machine. This opens up new market opportunities in the coatings and the applicator roll sector.

These photographs are of cells engraved by a Harmony 500-watt laser, using the Twin Track engraving technique: 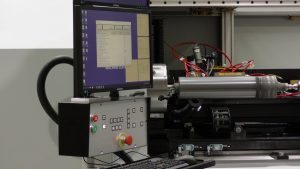 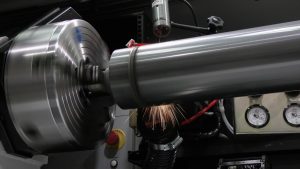 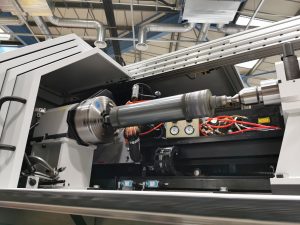 A simple way to think about the laser engraving...

Twin Track is a new hardware and software interface for ALE engraving machines, particularly when used to engrave high volume cell structures. The cell structures can be defined in the conventional manner, using screen count and screen angle. 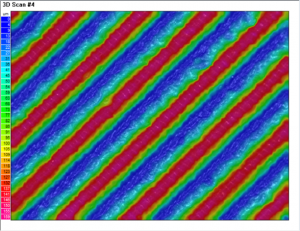 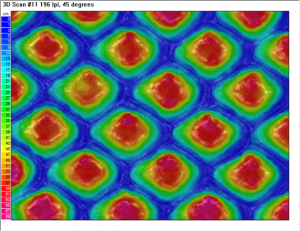 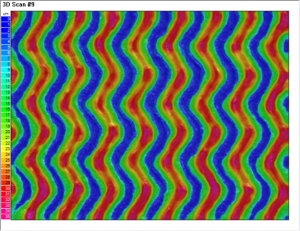 When using the Twin Track Cell designer software, the shape and depth profile of the cell can be defined. The system then automatically scales the cell design to fit the already defined template.

If you require any further information about Twin Track

The content of this website is not intended to form part of a contractual agreement and is subject to change without notice.

Below are the PC and External Interfaces from the Control System Diagram. Click on the images below to view them in more detail.